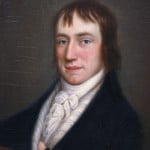 William Wordsworth was a famous English Romantic poet. Romanticism was a style of art, literature and music during the late 18th and early 19th centuries that focused on the imagination and emotions. During his lifetime there were four British monarchs: George III, George IV, William IV and Queen Victoria.

Family: Wordsworth’s parents were John and Ann. They were wealthy, as John worked as a lawyer for a British Earl. William was the second of five children. He was particularly close to his sister Dorothy, who also achieved fame as a poet. William’s parents both died before he was fifteen, and he and his brothers and sisters were looked after by different relatives. William married his childhood friend, Mary Hutchinson, and the couple had five children. Sadly, two of these children died in a single year – six-year-old Thomas and three-year-old Catherine.

Wordsworth wrote many poems that were mainly inspired by his love of nature and interest in politics. Some of his most famous poems include ‘Daffodils’, ‘London, 1802’, ‘The Prelude’ and ‘We are Seven’.

Daffodils is one of the most famous English poems. It is considered a classic of English romantic poetry. The poem simply tells of Wordsworth discovering a field of beautiful daffodils whilst walking with his sister Dorothy.

London, 1802 expresses Wordsworth’s opinions about English society, which he believed was selfish and lacking in morals.

The Prelude is widely regarded as Wordsworth’s masterpiece. It is a poem about his own relationship with nature. He started writing this poem aged 28 and continued to work on throughout his life. It was published three months after his death.

We are Seven is a simple poem that centres around a conversation between an adult and a little girl. The adult asks the girl how many brothers and sisters she has. She counts her dead siblings as part of the family and refuses to listen to the adult who tries to reason with her.

Famous lines from poems by William Wordsworth include:

Daffodils: ‘I wandered lonely as a cloud that floats on high o’er vales and hills….’

The Prelude: ‘One summer evening (led by her) I found a little boat tied to a willow tree…’

Listen to – ‘Daffodils’ by William Wordsworth